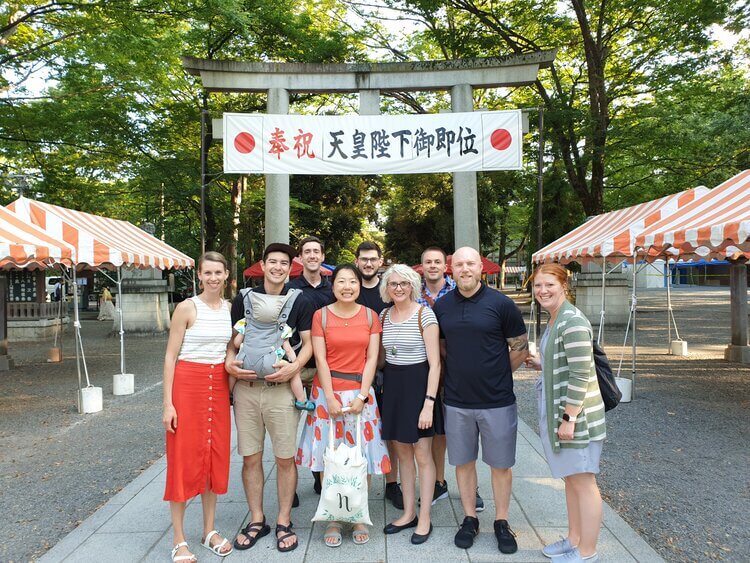 What might you experience if you decided to step out of your comfort zone and into another time zone for the sake of the gospel—this year?

We asked a few Hallows people to share a bit about their experiences from last summer, and here is what they said:

What was most impactful about your trip?

I saw that there is hope for reaching the Japanese people with the gospel.  The gospel is truly good news for them, because so many are living without hope and don’t even know why they are living. In previous trips to Japan, I’ve felt attacked by the enemy and tempted to believe that there’s no possibility of penetrating a culture that has been so dark and so apathetic towards Jesus for so long. But on my recent trip, I saw cracks in the enemy’s stronghold. I saw the impact of the sports camp we hosted in partnership with the local church in Tokyo and how God is using it to build relationships and soften hearts. Some Japanese families who got connected to the church through the sports camp are even professing faith now! God raised Jesus from the dead. Can he not save the Japanese?

What do you miss about your host country?

I could mention the wide range of interesting, enjoyable, and unique aspects of Japanese culture—the hot springs, delicious convenience store food, incredibly efficient train system—but as with anything, it’s all about the people. I miss all of the connections I made and relationships I’ve built upon. I miss the incredible experiences I had with our mission team and our Japanese friends. I also miss how traveling together while jet lagged, navigating an unfamiliar culture, and intentionally carrying out God’s mission has a way of increasing dependence on God and intimacy among fellow believers. It provides a spiritual jolt of energy so to speak and helps you actually feel you are part of a bigger picture. I’m also reminded how this can be my pattern of life even back in the States.

Rob is currently doing vocational ministry with international students in Seattle and is raising support to move to Japan to work in Missions. If you’d like to hear more about his ministry, you can contact him.

Tell me about the people you met.

During our trip to Fuchu, Japan, we met 99 Japanese children and their parents. The children signed up for an annual English learning camp hosted by Soma Fuchu, a local church that has been running the camp for the past several years. A team from the Hallows, along with volunteers from several other churches in North America partnered with the local church to accommodate more students.  The children we met were eager to learn, though some took longer to warm up to a different learning style than what they’re used to. A handful of families also invited the volunteers over to their homes for dinner, a rarity in Japanese culture.

What did you miss most while you were gone?

Not much, but if I had to pick one: The mild and breezy summers of Seattle. Our team went to Japan in its peak summer month, which is much more humid than what we typically experience in the PNW.

How do you want to remember this experience going forward?

Compared to past missions trips, my level of ‘preparation’ for this trip was far less. Even though I’m not particularly proud of this, I do wonder if this kind of lowly state was exactly how the Lord wanted me to enter this trip. I felt like I didn’t have much – no language skills, no specific burden for this country, no eloquent prayers or spiritual preparation. During this trip, I experienced the riches of having an intimate relationship with our Heavenly Father: By interacting with the families of Fuchu, I felt the Father’s heart for his children. By interacting with the other volunteers, I felt God’s desire for unity across churches and geographies. By interacting with the local church, I felt the importance of every person using whatever gift they have received to serve others.

– Nayoung, Fremont Expression, Japan Team || Nayoung regularly volunteers with our English conversation group for Japanese students, Eigo Cafe, and will love to tell you all about it! For more information about Eigo Cafe, contact eigocafeseattle@gmail.com.

How did God change your view of the world?

I’ve known that persecution of Christians happens around the world, but this was my first time experiencing it first hand. Their love for the Lord and for the lost in their own country is astounding. They are sacrificing and risking so much to follow God and to tell others about Him. Pray for the persecuted church! Pray for safety for those who are faithfully following Him. And pray that I (and other Christians in the US) would have that level of courage. Imagine what we could accomplish in a country where being a Christian is legal if we could have the courage of those in closed countries!

How can we be praying for the host organizations, your new friends and you?

The work there is huge and it can seem overwhelming, but I really got a sense of God’s great love for the people there and how much He desires to draw them to Himself. I believe that God is leading people to support the work by either going or sending. Pray that those people will say yes to the call of God. Our friends need more workers and financial support.

-Sara, Fremont Expression, Northern Africa Team || Shortly after the Northern Africa trip, Sara committed to going to Paris with World Team for one year. She’d love to take you out for a croissant and tell you all about why France needs more workers. You can contact her at srosenblad@hotmail.com.

You’re encouraged to prayerfully consider how God is inviting you to participate in the work He is doing around the world for people’s good and His glory. To learn more about ways to join in the work through prayer, sending or going, join Pastor Jeff for one of our Global Engagement Info Sessions following the Sunday Worship Gathering (February 16 in Edmonds and Fremont, February 23 in West Seattle). For more questions you can email Jeff.