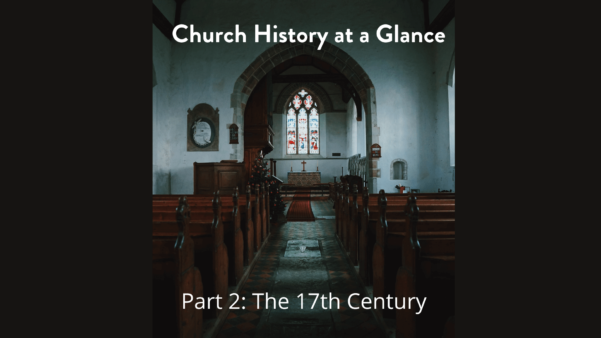 The Seventeenth Century has proven to be a fruitful period in Church history. While some keep attention on the Reformation, using Luther and Calvin’s solutions toward modern-day problems, many in our church-age forget about the faithful saints of the Seventeenth century. The Seventeenth Century brought the influence of the Puritans, Confessions, and philosophical developments; all of which continue to apply to the modern church today. The three most important issues to be discussed in the Seventeenth century are the practical theology of the Puritans, the Westminster Confession of Faith, and Francis Bacon’s philosophical reconstruction.

The Applied Holiness of Puritan Theology

Generally speaking, the Puritans of the Seventeenth Century receive a poor reputation in the church today. For many in the modern Church find the characteristics of the puritans as uptight, unhappy, and downright holier than anyone else. However, the modern church is at a loss to characterize the Puritans in such a way. The Puritans sought to connect the God of the Scriptures to every ounce and area of life. The pursuit of the Puritans was applying the Christian faith as practically and devotionally as possible. Woodridge says, “Generally speaking, Puritan theology was practical theology whose ultimate aim was spiritual renewal for the individual as well as society.” Puritan theology originated from Pious individuals Phillip Jakob Spener and August Hermann Francke and focused on four central elements: conversion, the centrality of Scripture, sanctification, and church renewal. While the Puritans are remembered for their distinct personal characteristics, the ecclesiastical traditions varied tremendously. Some Puritans were Anglican, others Presbyterian, and others Congregationalists. The unity among the Puritans was their love for the Lord and the pursuit of applying the truths of the Gospel to their lives. Living out the Christian faith required an applied holiness, meaning faith that is wholly devoted to Scripture and practical. Robert Elmer speaks of the Puritan movement as a movement that “sought to carry the Reformation forward and ‘purify’ the Church of England throughout the 1600s and into the 1700s on both sides of the Atlantic. Its followers sought purity of Scripture-based worship, purity of doctrine, and purity of prayer.” The effects of the Puritan movement shaped the Biblical fidelity of the American colonies, along with the refocused spiritual devotion of multiple cities in Europe.

Puritan theology is needed in the church today.

The Puritans’ commitment to Christ as their sole help toward holiness is not often seen among churches today. Unfortunately, modern churches are characterized as emotional, legalistic, or hypocritical by the unbelieving community and fellow believers. If the modern church has anything to learn from the Puritans, it is applying the holiness the Spirit gives to believers to grow like Christ. If the modern church (broadly speaking) took the posture the Puritans were known for, then perhaps, our Gospel-centered churches might be known for a similar whole-hearted devotion to their faith as the Puritans.

As the Puritan movement took hold in Europe and America, the year 1643 brought a unifying step forward in solidifying theological tenets of Puritan ecclesiology. The Westminster assembly was an effort to set a religious-military alliance between England and Scotland, while also providing the appointed divines with the necessary time to replace the Book of Common Prayer and develop church polity. Loraine Boettner says, “The Westminster Confession, which sets forth the beliefs of the Presbyterian and Reformed Churches and which is the most perfect expression of the Reformed Faith.” An astonishing defeat, the Westminster Assembly documented the central tenets of church polity in a format that provided a framework for future Confessions of faith.

The ministers (or Divines as they were called) came together between the years of 1643-1649, and over these years developed the Westminster Confession. The assembly met in the Henry VII Lady Chapel of Westminster Abbey, hosting a total of 151 people. The Divines represented were Presbyterians, Anglicans, Episcopalians, and Independents. While Episcopalians took the majority of seats, Presbyterians and Independents took strategic measures to gather at later hours during dinner times to vote in Calvinistic doctrines without Episcopalian hindrances. In the end, the Westminster represented the collaboration of Puritan theology, which was formally embraced in England and Scotland by 1648. By 1689, the Westminster confession would be established as the official church formulary which required all ministers to adhere to until 1910.

During the Seventeenth Century, the Protestant churches were not the only movements making strides in Europe. Philosophy and its key leaders also experienced a change, only towards relying on ancient philosophers as the foundational source of knowledge in new scientific discoveries. The world was changing and developing at significant rates, which left intellectuals asking whether or not the authority of Scripture was still valid in the Bible’s truth claims. The question of authority became a frequently discussed topic along with the natural scientific claims that accompanied it.

Francis Bacon, a modern scholar, and philosopher advocated for an experimental philosophy by which knowledge is pursued through an inductive method rather than the popular deductive syllogistic logic. Bacon’s trouble was his contemporaries brought many philosophic assumptions to their studies instinctively resorting to the ancient Greeks instead of the Bible. “Bacon downplayed the authority of classical authors by claiming that the Greeks, for example, had speculated too much in philosophy and had only a “narrow and meager” knowledge of history and geography.” Bacon firmly believed in the God of the Bible as a source of authority and truth. Rather than assuming scientific discoveries disprove God and reinforce ancient philosophical deduction, Bacon taught that scientific discoveries better explain the Creator of the Universe. René Descartes held a similar disposition towards the Greeks but held to a humanistic conclusion. Nevertheless, Francis Bacon reconstructed scientific and philosophic discoveries towards a Biblical worldview in a growing audience of modern humanistic philosophy.

Francis Bacon’s reconstruction of authority is an issue worthy of discussion in today’s church context. Today’s age of postmodern thought lends itself to deconstructionist philosophies, which hold that truth is purely subjective and one must rid themselves of all previous authoritative inclinations to find real answers. Bacon’s steadfast defense of authority amidst his criticisms is a testimony to the validity of God’s evidence of divine authority in scientific discovery. Cultures today believe religion and science are separate and the only way to resolve one is to disprove the other. If Christians can defend the Christian faith with the same esteem as Francis Bacon, the church today may see a resurgence of scientific discoveries for the glory of God.

The Seventeenth was an age of discovery that brought the challenges of authority. The major issues discussed display the movements, developments, and application of the Protestant churches’ distinctive efforts toward truth. The Puritans understood man’s place in the world through the explanation given from the Scriptures. Their serious pursuit of godly living, along with the Westminster Confession of Faith proved their efforts were fruitful in the end. Francis Bacon’s resolve to reconstruct the modern-day philosopher’s deductive methods remained steady as he held to God’s authority teaching the world about himself instead of assuming the answers lie with the Greeks. The Seventeenth Century was a time of God-glorifying action, confession, and defense of truth in a developing world seeking the truth.