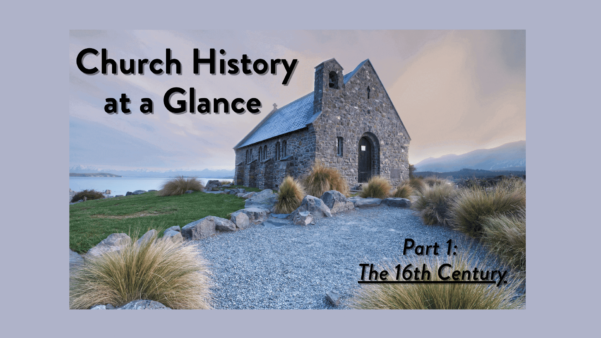 The Reformation period, particularly within the 16th Century, continues to mark some of the most historic moments in Church History. The Reformation is largely known for the Christian church’s separation of Catholicism and Protestantism. This is the case, but some particular moments gave way to much movement towards Protestantism. Martin Luther, John Calvin, and Ulrich Zwingli were each pillars of the Protestant Reformation and who’s issues will be addressed. The three most important issues to be discussed and explained are Martin Luther’s historic indulgences controversy, John Calvin’s ministry in Geneva, and Ulrich Zwingli’s Reformation distinctives of the sacraments. Each issue continues to be talked about in the church today and distinguishable moments that define Christianity’s historical issues of the Reformation.

Before Martin Luther made any strides toward a reformation, a silent stirring of discontentment had already been in the hearts of faithful Christians for years. The practice of indulgences was among the most controversial. The long-practiced giving of indulgences took a turn when John Teztel, commissioned by the Pope, began exploiting people’s wealth through the advertisement of indulgences. Phillip Schaff explains an indulgence as, “the remission of the temporal, (not the eternal) punishment of sin (not of sin itself), on condition of penitence and the payment of money to the church or to some charitable object.” Indulgences were under the sacrament of penance, to which a faithful believer would give towards the salvation of a deceased family member for the assurance of their salvation. If someone died and the family believed they may be in purgatory, it was especially important to give indulgences. Martin Luther was disturbed by this teaching and it grew considered over its practice. When he wrote his ninety-five theses on the Castle Church of Wittenburg, he directly addressed his concerns and the pope’s authority to relieve punishment. Luther’s intent in writing the ninety-five theses was not to rebel against the pope or the church, rather, “from a zealous desire to bring to light the truth”. It was Luther’s pursuit of truth and the disillusioned church that sparked Luther’s need to address the leaders of the church.

While many see Luther’s act of nailing the ninety-five theses as the beginning of the Reformation, addressing the misuse of indulgences was arguably the first. Luther’s concerns were not a rejection of papal authority, instead, he believed the indulgences took advantage of his congregants and suppressed them into a false constraint of punishment. This was a desire to reform false practices in the church. As a faithful teacher of the Word, he felt it was his responsibility to address his concerns appropriately. However, John Tetzel saw Luther’s concerns as a direct denial of the authority of the pope. As Woodbridge writes, “from Tetzel’s perspective, the pope had authorized him to sell indulgences, and therefore to challenge the sale of indulgences was in fact a challenge to papal authority.” Unbeknownst to Luther, his concern was shared among many others and his ninety-five theses would be the heartfelt cry of his people. Luther would go on to dispute the Augustinian Hermits in Heidelberg, papal meetings with Cardinal Cajetan and Karl von Miltitz, and finally the Holy Roman Emperor at the Diet of Worms.

This issue is important for modern ministry contexts because the indulgences did not merely rob people of money, it taught a false doctrine of Christianity. The indulgences controversy shows modern Christians that the issue was out of Luther’s frustration primarily, but the people in the church sensed a distortion needing correction. Luther was able to articulate this theologically, which should inspire pastors and theologians today. The role of the pastor is to shepherd the fold out of danger, even if that danger is advertised in the church and marked as holy.

Geneva was a self-governing city occupied by Switzerland in 1536, which sought to establish itself as a Protestant city. Although the Genevan citizens were not entirely in agreement with the city’s new efforts, thus, John Calvin and his friend William Farel found themselves newly installed pastors overseeing a complicated political and religiously torn Geneva. The transition of Protestantism in Geneva was not easy as many citizens still saw themselves under Rome, but now that Calvin and Farel were there to preach away from Roman Catholicism, the citizens had a severe distaste for Calvin, making his ministry incredibly difficult. The city’s dislike for Calvin resulted in their directly insulting him, but ironically, their efforts to mock and discourage confirmed his mutual distaste for them! Calvin did not find any joy in serving the Genevan city and frequently spoke of his desire to write in solitude. For the two years he served with Farel in Geneva, they sought to make Geneva a truly Protestant city, not only one in name. In 1538, tensions and rejection finally gave way to the Geneva Church formally banished Calvin and Farel from the city. Calvin happily obliged.

After three years of successful (and pleasant) ministry in Strasburg, the Magistrates of Geneva faced a new problem. Erasmian Cardinal Jacopo Sadoleto took advantage of the absent Protestant pastors and sought to return Geneva to the mother church in Rome. The magistrates needed help, so they asked Calvin to write a response to Sadoleto, even though he was still technically banished. John Calvin wrote a historic reply to Sadoleto in 1539, causing the magistrates to invite him back to Geneva to serve as their pastor. Calvin was absolutely opposed to this offer saying, “I would rather submit to death a hundred times than to go to that cross (Geneva)… Who will not excuse me if I am unwilling to plunge again into the whirlpool I know to be so dangerous?” However, with much reluctance and edifying peer pressure from Farel, Calvin returned to Geneva in 1541, preaching his first sermon right where he left off in 1538.

Calvin’s faithfulness to Geneva was a demonstration of the Reformation’s birth of faithful pastors who sought to truly live out the Scriptures. For modern ministry contexts, Calvin faithfulness exemplified the Protestant Reformation. Amidst rejection Calvin and Farel still taught the Scriptures and believed following God’s will was more important than self-wills. Much can be learned from Calvin as a theologian, but an equal amount of lessons can be learned from the example he set for future pastors facing trying difficulties and discouragement in the ministry.

Reformation Distinctives of the Sacraments

Ulrich Zwingli was a leading Swiss Reformer also at work in reforming the church towards following the biblical authority Scripture against the corruption of the Catholic Church. As Alister McGrath writes, “other reforming movements were springing up elsewhere in Europe around this time, initially without any knowledge of Luther’s activities and aspirations.” Zwingli served as a chaplain and later a priest in Einsiedeln before 1524, when Zwingli took a Protestant stance and resolved that every doctrine in the church should be judged according to Scripture, not a papal authority alone. Zwingli believed there was a major discrepancy between the practices and teaching of the Roman Catholic Church and the teachings of Scripture. The teaching of Erasmus gave him greater confidence in the interpretation he was concluding. Even though Zwingli and Luther never met in-person, the two led significant efforts of the Protestant Reformation.

The distinction between the two was mostly their disagreement of the nature of the sacraments, more particularly, the Lord’s Supper. While Luther believed that in the Lord’s Supper the body and blood of Christ were truly present, Zwingli held the Lord’s Supper was a symbolic act in which Christ is present through the ministry of the Spirit, truly present as Luther’s resolutions. This debate is a true distinctive of the Reformation, because both were looking to the Scriptures as the full authority instead of the papacy. Unfortunately, Luther and Zwingli reached irreconcilable conclusions. Neither could agree with the other’s positions and parted ways as two parallel forces going the same direction, but never uniting. Zwingli’s position of the Lord’s Supper influenced Luther to compile his own confession in 1530. The Confession of Augsburg was, “the result of the colloquy at Marburg, an abortive attempt by Philip of Hesse to reconcile the positions of Luther and Zwingli.”

The cause of this effort was to distinguish the two protestant positions. However, the two positions are in such contrast with each other that for ministry contexts today, the two men are pillars in redefining the church’s understanding of the Lord’s Supper. Thankfully, for churches who don’t adhere to Luther’s “Christ is fully present” or Zwingli’s “symbolic in nature” positions, Calvin was able to reconcile the two. John Calvin explained a middle ground of sorts. Christ is present in the work and ministry of the Holy Spirit, but not physically present. But the act of the Lord’s Supper is not just a symbolic act, but far more meaningful and ministering as Christ is spiritually present through the Holy Spirit.

The Reformation period brought much sacrifice and challenge to Christians in the 16th Century, but amidst those difficulties God was at work to bring a reformation that would last far beyond the church’s thought. Luther, Calvin, and Zwingli each exemplified major issues of the Reformation while demonstrating Christ-like faithfulness to the church. Luther demonstrated faithfulness in his deliberate appeal to confront the practice of indulgences. Calvin demonstrated faithful ministry by following Christ in hard places, like pastoring a difficult Geneva. Zwingli practiced faithfulness by adhering to the Scriptures above all else and interpreting truth by the authority of God’s Word, not the papacy. Each theologian held specific challenged but ultimately came together as forces of God’s faithful men of the Reformation.