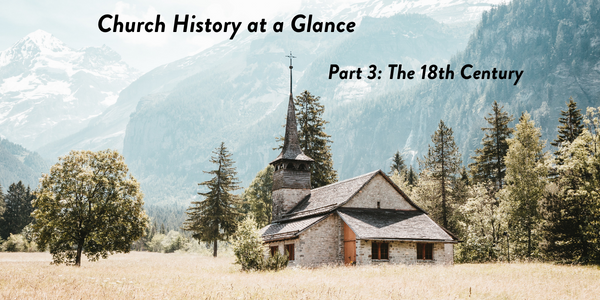 The eighteenth-century is a significant period in Protestant church history specifically and the Western world more broadly. The eighteenth-century was a period of pursuit and unconcealed, unabashed search for meaning in a changing world. Europe was changing before everyone’s eyes as they saw the dawn of the American colonies develop. Protestant Christianity during this period set the foundation for evangelicalism through some of the most influential men in church history to this day. The three most important issues to discuss in the Eighteenth century are the magnificent preaching of George Whitefield, the thoughtful faith of Jonathan Edwards, and the persevering fight for freedom of William Wilberforce. The eighteenth-century church in England and America is indebted to the faithful ministries of George Whitefield, Jonathan Edwards, and William Wilberforce. Their strengths and passion for the Gospel to work in and through believers influenced everything they did. Whitefield’s love for the gospel manifested its passion in his preaching, while Edwards harnessed his passion in the written word. Wilberforce exuded God’s love for mankind in his persistent battle to abolish the slavery of Africans in Europe. Whitefield, Edwards, and Wilberforce have much to teach the modern-day church about faith, hope, and perseverance.

The Magnificent Preaching of George Whitfield

George Whitefield was a popular Anglican priest turned evangelist/missionary in 1736-37. He is most remembered for his persuasive preaching that captivated thousands of people. Following Wesley’s, Whitefield found much success in preaching to townsfolk in the open fields of New England. Although Whitefield was an ordained Anglican, the Anglican churches saw Whitefield as a gospel enthusiast and refused to let him preach in their churches. While disappointed in Anglican church’s rejection, Whitefield creatively found other ways to minister and preach the Word of God to people.

During this time, England was going through a crisis of belief. The enlightenment period was well in effect and an increasing detachment from religion began taking place by commoners and intellectuals. This was influencing New England as well, the disconnect of personalized faith was threatening the church. John and Charles Weasley began combating this threat through the evangelistic method of field preaching. The purpose of field preaching was to preach the gospel to the lower class workers and families who worked the fields and mines, as they were often denied entrance to the Anglican churches. The other benefit of field preaching was space. By preaching outside, it meant that the preacher was not limited to a sanctuary and could effectively preach too much larger audiences. This was the method of evangelism that made Whitefield so popular. Ever since he began preaching, his dynamic speaking and gospel presentations stirred crowds’ affections held their attention for long periods. Over time, his ministry grew to substantial crowds in the thousands and Whitefield often found himself preaching to entire towns and cities.

His gift was undeniably the supernatural work of the Holy Spirit, as few people in history ever preached so often and to such large crowds as Whitefield. In John Piper’s biography of Whitefield, he reflects on the nearly unbelievable giftedness of Whitefield, “in the fall of 1740, for over a month he preached almost every day in New England to crowds of up to eight thousand people. That was when the population of Boston, the largest city in the region, was not much larger than that… On Wednesday, April 6, he preached on Society Hill twice in the morning to about six thousand and in the evening to nearly eight thousand. On Thursday, he spoke to, “upwards of ten thousand.” A truly remarkable man of passion to preach the Gospel.

Whitefield’s preaching ministry was evidence of God’s work of the Great Awakening of faith in New England. Whitefield’s ministry is an important issue for the church today because his preaching was a supernatural display of the growing movement of evangelicalism. The modern-day church would do well to remember mighty men in the past as Christians ask how God will move in the future. Whitefield’s creative resources mixed with an unmatched gift of preaching display the power of God through His people in the past and in the future awakenings to come.

The Thoughtful Faith of Jonathan Edwards

If George Whitefield’s preaching was a miraculous work of God’s power during the Great Awakening, then Jonathan Edwards received the same power in his writing and local church ministry. Jonathan Edwards was a prolific writer, theologian, and pastor in the eighteenth-century and continues to be one of the most influential American theologians today. Edwards was a congregationalist and a Calvinist who desired the church filled with believers who hearts were filled up with affections for Christ. The Christian life to Edwards, was not a nominal faith, but a devoted faith that encompassed every aspect of life. However, Edwards believed that a clear understanding of who God is was essential to faithfully living out Christian faith.

Edwards was a contemporary of Whitefield, who reinforced Calvinistic doctrine during the Great Awakening in 1740 New England. Edwards was appreciative of Whitefield’s preaching, and Whitefield was appreciative of Edwards. The two ministered together on occasions and are collectively attributed to the Great Awakening rivals of the eighteenth century. One distinction between Edwards and Whitefield was their calling of ministry. George Whitefield spent most of his ministry traveling as an evangelist preacher to hunderds of churches through different colonies and countries. Edwards on the other hand, spent the majority of his ministry in one church. Edwards was committed to seeing gospel transformation in lives of his local congregational level, but this is not to say that Edwards was not missional. Edwards edited and published An Account of the Life of the Late Reverend David Brainerd, his would-be son in-law and missionary. Brainerd was a missionary to the Indians and documented his efforts in a journal. After Brainerd passed away from Tuberculosis in Edwards home, Edwards felt compelled to publish his journal in hopes that Brainerd might encourage other missionaries to persevere in their faith and mission. Brainerd’s journal was a popular book to read among churches and missionaries, including William Carey.

Edwards is still regarded today as one of America’s notable and influential theologians. Edwards is an important figure because he put substance in his ministry through the written word and preaching. Edwards displayed the power of God’s rival and passion for the gospel in his writing, as Whitefield displayed in his preaching. Both were unique men God raised up to shepherd and teach those in the Great Awakening, thereby laying a foundation of Calvinistic theology throughout the American colonies.

The Persevering Faith of William Wilberforce

George Whitefield preached the gospel to many, Jonathan Edwards preached and wrote theological works about the gospel, and William Wilberforce lived out the gospel in Parliament. Wilberforce is most remembered for his fight to abolish the international slave trade and said, “God has put before me two great objects, the Abolition of the Slave Trade and the reformation of manners.” Wilberforce was profoundly influential as a member of parliament sought to reform the upper class citizens toward Christian values. This is mostly due to Wilberforce’s conviction that his faith should be used to shape and influence his political position. Wilberforce was along the long list of English parliament who believed the political sphere should exemplify and stand for Christian morals, which is one reason he was so fundamentally against the slave trade.

Over the years of effort and toil to convince fellow Parliament toward his convictions, Wilberforce came to clearer observations of the root problem, Piper explains, “As he endured decade after decade in the battle against the African Slave Trade, he came to an amazing diagnosis of the problem. His nominally Christian, British countrymen did not understand justification by faith in its proper, foundational relation to sanctification.” Wilberforce made the connection that the Christian faith involves the entire person, and his presence in the midst of nominalism displayed a greater sense of gospel conviction and action. His convictions influences his politics, and his politics were shaped by Christian values.

Wilberforce was an outstanding figure in Parliament and important figure in the Eighteenth-century. His continual perseverance to abolish the slave trade testified to his devoted allegiance to the Gospel of Jesus Christ. Christ was ultimately shaping Wilberforce, not cultural pressures. Wilberforce’s determined actions teach the church today to stand for Christian values and show compassion to all people groups, even when it may be unpopular to do so.

Whitefield, Edwards, and Wilberforce continue to shape areas of the Protestant church today. Whitefield’s preaching influenced many others after him, Edwards continues to teach, and Wilberforce inspires the Christian liberators. All three men show the distinct power of the eighteenth century in their unique ministries. The substantive Kingdom work they fought for has shaped the modern church and continues to do so as believers today walk in similar paths of Christian faith.