On Easter Sunday, our West Seattle Expression had the joy of rallying around and celebrating with Paul as he publicly shared the work of Christ in his life through believer’s baptism. 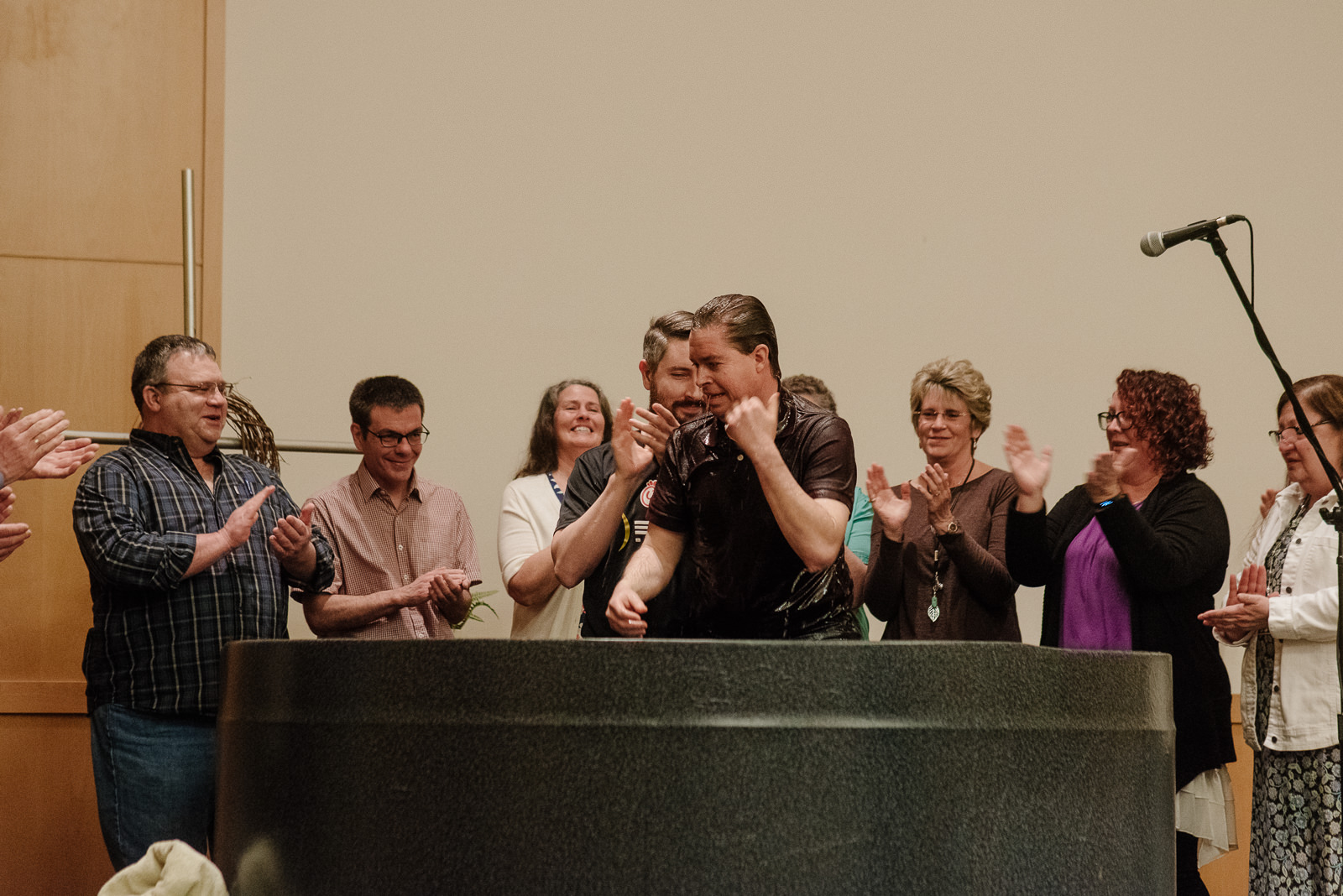 Paul surrounded by his missional community

I grew up Mormon and was baptized Mormon when I was eight-years old. I was active in the church. I have two younger siblings—with me being the oldest. Home was not very stable, and we moved around a lot. My mother and father both worked very long hours and were not home a lot. I spent a lot of time with my grandmother, and I was very close to her. Sadly, she passed when I was 10, due to complications from arthritis. I didn’t understand. My father passed away five years later when I was 15—a traumatic affair that still affects me and my family. My mother then left the Mormon church and converted to Islam, which I also did at 16. That was a huge change, and very different. I joined the Marine Corps right out of high school. I stayed in for five years. I got out wanting to start a family. Eventually, I fell in love and married a coworker.

The marriage worked well at first. We traveled a lot and talked about having kids and the future. Sadly, about three years in, she was diagnosed with Type-2 Diabetes. It ran in her family so it wasn’t very surprising, but she took it very hard. She became disinterested in having kids and became very depressed. I tried to get therapy for both us, but she would never do it. Things became worse and worse. I seemed to be unable to stop it although I tried. She soon began talking about getting a divorce.

I prayed and prayed, but it didn’t seem to be making a difference. In Mormonism, and in Islam, if you follow the rules and you do what you are expected to do, everything would be fine. But that wasn’t happening! I was following the rules. I said my prayers five times a day. I fasted. I observed the holy days. I didn’t eat pork. What was I doing wrong? I was very confused and in despair. It took a near-death experience to wake me up. I had to make a decision so I left what had become a destructive relationship to the both of us. Leaving was the hardest decision I had ever made, it crushed me. I had lost my partner, gave up the house that I had worked so hard for, and went into heavy debt. Most importantly, I had lost touch with God and had lost hope.

But, God had not given up on me. A good friend gave me a room to live in until I could get back on my feet. I went from a house to a little bedroom. From a bed to sleeping on an air mattress. All of my things either in storage or shoved in the closet. I lived like that for almost two years. It was very humbling.

Rather than turn from God, I turned to God. But, things were a bit different now. I was humbled and prayed earnestly and sincerely. And, I was trying very hard to listen this time, and not just go through the motions. I was guided back to the Bible and discovered that in all my time, I had never actually read through it. I knew the stories, but I had never read them. So, I started from the beginning.  In the two years I lived in that bedroom, I read the Bible at night, and then began to read at lunch on my break. I thought I knew the Bible, but found I didn’t. After reading through the Old Testament, I now had a basic understanding of what had happened to the Jewish People, and about the covenants God had made with them. When I made it to the New Testament and read about Jesus—Our Savior—I truly began to understand who Jesus was and what he truly represented. This had a profound affect on me, and I began to really look back on what happened to me. I realized shamefully, that I had tried to fix it all on my own. I never truly accepted God’s help, mainly out of stubbornness. I began to be seriously introspective, but this time I asked God to help me, and was willing. I had come to understand that I could not do this on my own. I did need help. And only God and Jesus could help me. Additionally, I recognized a second thing that was also profound—I came to accept that God and Jesus loved me, unconditionally.

This reflection and acceptance led me to leave Islam to follow Christ.  It wasn’t just a title change, or just a change in the way I worshiped God. My perspective had changed, and I came to God through Jesus willingly, humbly. I began to truly and sincerely follow Christ’s teachings. I began to make praying (real praying) not a ritual, but a regular part of my life. And my life began to change. God helped me learn from the things I had been through. He changed my views on what is ultimately important. I am growing in my gratitude to Christ.  So when Jesus prompted me to be baptized, I asked Pastor Andrew about it. And he asked that I share my story, which I do willingly. I am a follower of Christ and have no hesitation in professing my Love for Him, who died on the Cross so that all of us might live and be saved.