God Knew What He Was Doing…

Each of us carry forward a story of faith. As we study the stories of the men and women featured in Hebrews 11 in our Sunday teaching series entitled “Stories of Faith,” we will be sharing your stories of faith—God’s story—for others’ good and God’s glory. Today’s story features Eric Henry from the West Seattle Expression.

While Eric Henry would insist he is simply someone who has tried to follow God’s leading in his life most would agree he is an accomplished, endearing soul who happens to have a world of experience and yet faces his own personal tests of faith—much like everyone else.

Although he grew up in Montana, Eric graduated from Trinity University in San Antonio, Texas completing a Masters degree in Teaching.

Eric felt God’s leading early in life. “I wanted to be an engineer, but the only university I got a scholarship to was a liberal arts school with an engineering program. But God knew what He was doing. I found that I wasn’t really suited for engineering. At the same time the university had just revamped their education department. It was the perfect place for me to move into teaching.”

His first job was in Guatemala as a high school teacher. Eric found himself developing his identity as a teacher and building new relationships that have lasted until this day. “After five years I felt that The Lord was urging me to move on—though I didn’t know where,” Eric recalled.

Eric soon landed a new job teaching computer skills in India. But before he signed the contract the job fell through. “It was late to look for another position but coincidentally, that school’s sister school turned out to have a Social Studies opening—in southern India. He took the job. Here again, he would be teaching high school but with an international curriculum. The diversity was new to Eric. As well as Christian students there were Muslims, Hindus, and Buddhists. “I learned a lot about myself and my faith at this time and how to talk with people of different perspectives,” Eric said.

“I loved India, but after the seventh year I knew God was again asking me to move on.” Eric then took a job in Indonesia’s capital city of Jakarta where he remained for 10 years. It was in Jakarta where Eric grew in new ways. “I learned a lot more about being part of a church community there, and about discipling.” he reflected. There was a comfort in Jakarta for Eric. He also felt a generous respect from the community for his ten years of teaching. 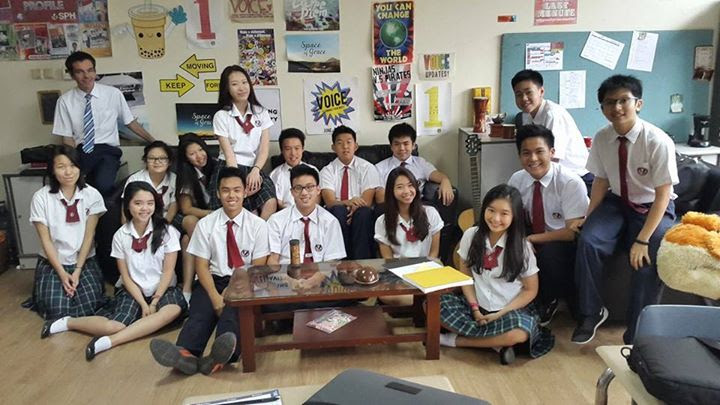 In the past, when Eric changed jobs, there was always a job to transition to. When it came time to leave Jakarta, giving up comfort and status without another job to transfer to or a plan in mind was a new challenge to Eric. Nevertheless, he followed his convictions to move on.

When asked what he learned from all these transitions Eric replied, “We often stress so much about finding our calling. Should I turn left or should I turn right? God is going to direct us as long as we are actively following Him. He is going to put us in the right place at the right time as He continues to mold us.” And sometimes, following ones convictions means knowing when to leave. Or, as Eric put it, recognizing when “I am holding onto something I should no longer be holding on to.”

Eric’s sister and mother were living in Seattle. In his decision to leave Jakarta, Eric recalled, “I didn’t feel God was calling me anywhere else in particular so I came to Seattle to be close to family. Now I can see God was leading me all along.” He did not find a full-time teaching job in Seattle right away—only substituting. As with any job going from tenure to no tenure can be tough. After twenty years of international teaching, Eric was asked a naïve question while substituting here, “Don’t you want to be a real teacher someday?”

Eric recalls that story as a seasoned man of faith. “I learned my identity as a teacher or a coach can be taken away and that I have to rely on God for my identity and nothing else.”

In time, Eric found that substitute teaching here was a great opportunity to get into a variety of classrooms and learn more about American education. But he didn’t want to be a substitute forever, and when job interviews fell through he began to wonder if God had other plans for him. And then he ran into the principal he had been subbing for. It was in a branch of the library that neither Eric nor the principal normally went to. A conversation ensued—and another door opened. Eric now teaches full-time at Tyee High School, coaches basketball and volunteers with Young Life in Tukwilla.

Talking with Eric Henry long enough would convince anyone he is most certainly a “real” teacher especially when he looks back on life’s lessons.

“When I think what I would tell younger people about their calling, I would say pray about it. Look for pride or selfish, superficial motivations and repent of them first and then seek God. Your calling is to follow Him. Take one step at a time even if your job doesn’t seem perfect and to remember that sometimes a calling isn’t forever. God will get you where He wants you.”

The fruits of Eric’s faith are evident in his joy. “I’m now in one of Seattle’s most ethnically diverse high schools which is right where I should be.”

Our calling to make disciples of all nations starts right here in Seattle. We are in the beginning stages of developing an opportunity to minister to international families—particularly refugees—near our West Seattle expression where Eric gathers to worship. If you are interested in hearing more or being a catalyst for this or other outreach opportunities to internationals, please contact serve@hallowschurch.org.

Thanks to Bill Bacon for using his gift of listening and writing to help people tell their stories and so we can celebrate how God is at work in our community. If you have a story of faith you would be willing to share, please email info@hallowschurch.org. We look forward to hearing about it!