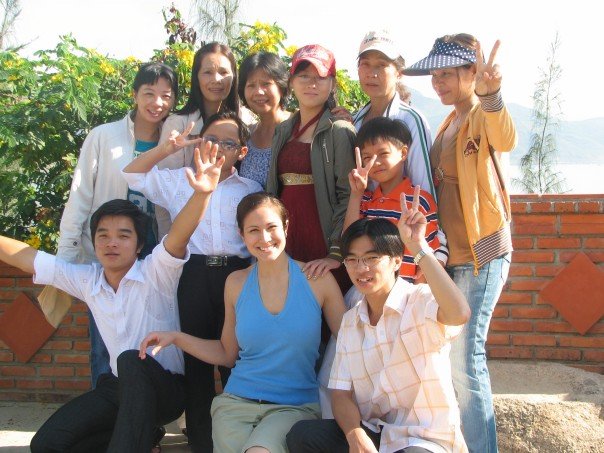 Pictured Above: Kim with cousins and aunts in Vietnam.

These have been the constant companions of my family in south Vietnam for decades. Not only have they been unwanted companions, they have been powerful captors. On Sunday I was filled with hope and awe as we looked at the One who is more powerful than any captor or unwanted companion in this life. How incredible is it that the God of the universe was at work to intersect the lives of an everyday, “normal” believer like Philip with an Ethiopian eunuch thirsty for what only the gospel could quench. I was reminded that God is still at work in his community to multiply the gospel—to multiply the joy of salvation. I was reminded of the first time I went back to Vietnam to visit my aunts, uncle, cousins and grandmother.

My large family lives in what was the capital of South Vietnam before the Vietnam War consolidated the South and the North under the power of the communist Viet Cong. Families like mine experienced incredible suffering, poverty and fear—particularly because my grandfather was an officer in the Southern army. They managed to survive the war but only to experience instant grief when my grandfather died of an assumed heart attack in the middle of the night leaving my mom and her five young siblings to the sole care of my young grandmother. My mother, being the oldest sibling, began working as soon as she was able to provide for her siblings, and she eventually made her way to the states.

After many complicated and hard years experiencing life isolated from her family and in a foreign land, my mother met and married my father in Chicago, IL. They eventually had me ten years later. Fast forward thirteen additional years and we are living in Atlanta, GA. I was in middle school, and a friend named Mandy began telling me how much she loved her church’s youth group. She invited me to go with her, and I went even though I had little experience with Christianity. I am so glad I did.

Because my friend, Mandy, chose to share that which brought her so much joy, I too became a Christian one year later. I, likewise, couldn’t contain the good news of Jesus and immediately went home to share with my parents after I became convinced of and experienced the saving grace of God in my life. My parents in turn agreed to start going to church with me on Sundays.

Eventually my father became a Christian and in addition to hearing the gospel every Sunday, my mother was now hearing the message and seeing the impact of the gospel in our lives throughout the week. For three years she observed how the gospel was changing my father and I. She even participated regularly in Sunday worship gatherings, but she continued to worship in front of the many Buddhas set up in our home and business. She was convinced that because we were Americans that we could be Christians but because she was Vietnamese she should remain Buddhist.

But God was working on my mother’s mind and heart, even through some especially trying and depressing circumstances. Riddled with anger, fear, bitterness, guilt and worry, my mother just couldn’t shake these constant companions no matter how hard she tried. Finally, she accepted our challenge to try praying to this Jesus she had been hearing about—this Jesus that removes guilt, loosens the grip of bitterness, addresses anxiety, and creates a new heart with new hope. When she did, she was shocked. He did it. He did what she couldn’t do on her own, and she soon after decided to confess her sins, her need for him and her desire to worship Him only with her life.

Fast forward eight years. My mother and I are sitting in a hot house in Ho Chi Minh City, Vietnam, surrounded by the sound of children crying, music playing, scooters honking, and adults chattering. We haven’t had a good night’s rest because my family refused to turn off the lights at night in fear of angry spirits and the ghosts of deceased ancestors. They were afraid of someone coming in and robbing them (or us because everyone knew when foreigners were in the neighborhood). They were weighed down with the burdens of wanting to be good enough to achieve peace but never quite being able to. There, sitting on the edge of my aunt’s bed, my mother was beaming. She couldn’t help but share with her sister about the good news that gave her a new life with new hope replacing her fear with freedom. She couldn’t help but quickly and excitedly tell her all about the peace God had given her despite experiencing continued hardships with business troubles, my father’s ailing health, and betrayal from trusted friends.

My aunt took it all in, and then responded that this was the first time she had heard about this Jesus. She asked, “If it is true, why haven’t I heard about the gospel before?” In that moment, I was struck with how God, indeed, saw and deeply cared for each member of my family. I saw how he graciously began my mother’s story many years earlier, how he intricately wove family, friends and exposure to the gospel into her story, how he saved me as a teenager, and then, how he eventually saved my mother. I saw in that moment that my salvation was clearly not just my own. My mother was not just exposed to and finally receptive of the gospel for her own good either. We were saved for our good, His glory and also for the sake of our family. He saw them too. He wanted them to know the gospel too.

Full of overwhelming awe of God’s sovereign grace, I was able to look my aunt in the face in that moment, and reply in full confidence that God was so trustworthy and powerful that He had implemented an intricate and long plan that spanned the years to lead us to this point for that very reason- to share the joy of the gospel with them. This is how I was reminded Sunday that God is still at work to magnify and multiply his gospel through His community to the ends of the earth. I remember my mother’s beaming face, and I know that, indeed, our joy will not be complete until we share it with others. Our joy will not be complete until my family believes and experiences the gospel for themselves- tasting and seeing that God is good and willing to free them from their captors of sin, fear, guilt, shame and even death.