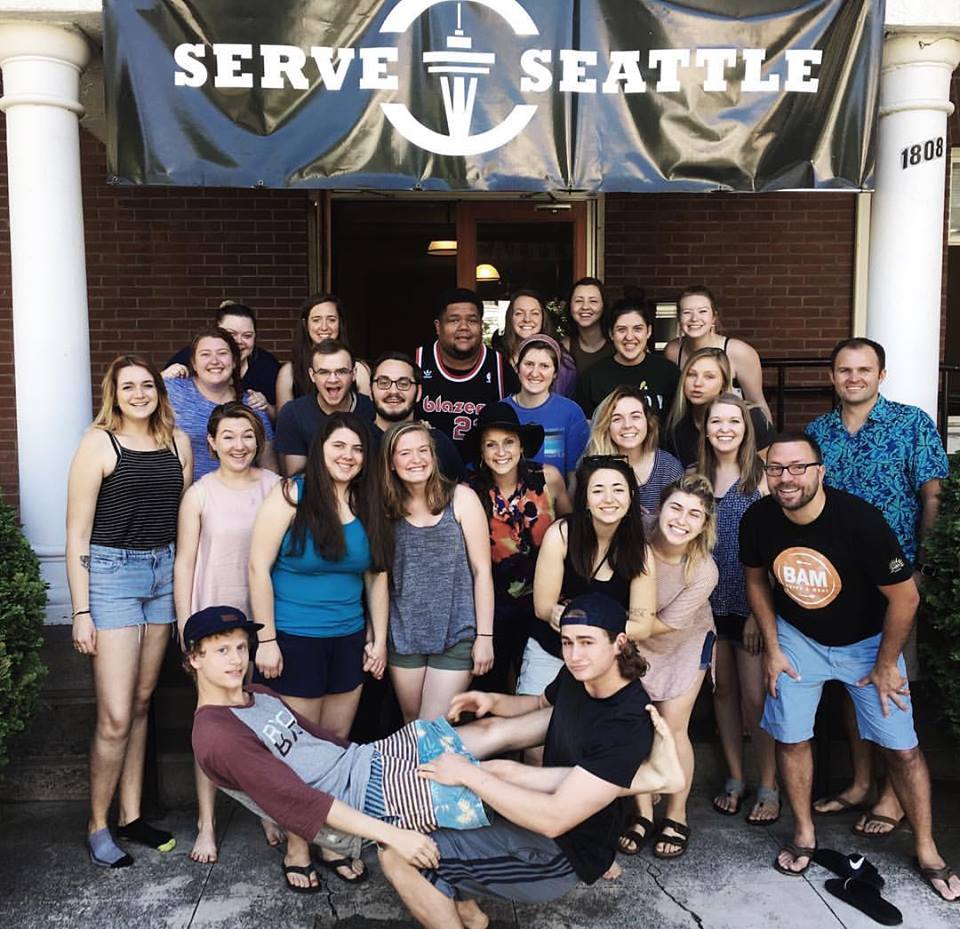 Meet Sam -pictured on the far right in that rad Hawaiian shirt. Sam is one of The Hallows Church original core team and covenant members. In addition to being a sports enthusiast, father of two, and husband to Jess, he’s the Director/Founder of Serve Seattle, an urban missions and discipleship program through Seattle’s Union Gospel Mission. We asked him to share about the work God is doing in Seattle through the Serve Seattle program.

We are currently in our 5th year of Serve Seattle, an urban missions institute, and have had approximately 100 college-aged students spend either a year or a summer with us up to this point. We are a community of Jesus followers who live, learn, serve and play together. Our students come from all over the country having pushed the pause button on college or career for a season while they live as missionaries to those with the greatest need in Seattle.

They accomplish this primarily through serving at a variety of different internship opportunities we have developed in the various departments at Union Gospel Mission and around the city at places like New Horizons, World Relief, DSHS, Seattle World School and many others.

While good work is happening all over the city through these internships, we have received consistent feedback that the most impactful part of Serve Seattle is the community and transformative healing work that happens on an individual level as this diverse community becomes family and shares in the joys and struggles of life on mission together.

This summer God has brought together a group of 16 people, most of whom are on summer break from college, and there’s been some really significant growth. Several shared early in the summer about recent hurts and fears that they were bringing with them surrounding past trauma, family crisis, uncertainty of future and/or doubt towards Christ, His presence, and His goodness. Things were brought to light that had never been shared before. Through these last 6 weeks we have rejoiced as we have witnessed chains being loosened, wounds being healed, and freedom, joy and health being established in the lives of our interns. Several of them are hoping to start ministries similar to the ones they have been serving at this summer in their home towns.

Personally, I am currently feeling a bit challenged by the pace and complexity of the urban issues we are engaging with on a daily basis. Some days I find myself wondering where God is in all of it. Yet even though the days often feel jumbled and chaotic, at the end of each year the testimonies of lives changed make the effort worth it. Prayer for renewed joy, endurance, perseverance (and children who sleep so Jess and I can sleep) would be greatly appreciated.

We are also still accepting applications for the 2016-2017 yearlong program that starts September 19th so if anyone is interested in this type of opportunity check out serveseattle.org.